The West Midlands has a shortage of suitable quality development land for large scale rail linked logistics warehousing. Kilbride has selected the site at Four Ashes site following a review of the region and has signed up land options over the site. The project is being taken through a major National Infrastructure planning application for warehousing and a large scale intermodal rail terminal. The rail infrastructure has GRIP 3 approval from Network Rail.

The site is unique in that has excellent road and rail infrastructure together with the scale of developable land capable of delivering warehouse units of between 200,000 square feet and over 1m square feet. Four Ashes is one of very few sites in the UK with good road access and where the rail access is the necessary W10 gauge that will enable the largest sized containers to be moved on the rail network to the rail terminal.

The site is located on Junction 12 of the M6 and is bounded by the A5 to the north and the A449 dual carriageway to the west. 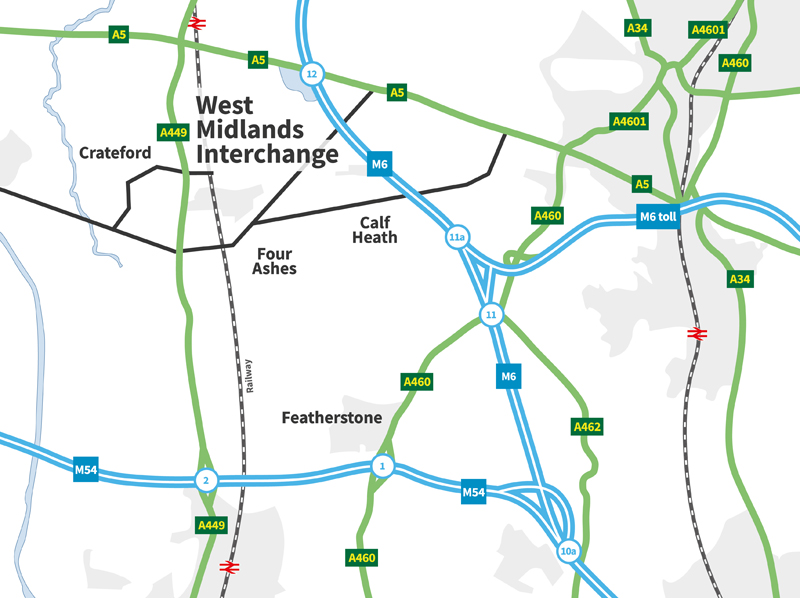 Plans for a major strategic rail hub to boost the West Midlands’ economy were announced today (Thursday 14 April 2016). If approved, it could create between 6,500 and 8,500 new jobs as well as ease HGV lorry congestion on some of the region’s busiest roads.

Early proposals outline a freight interchange with warehousing and other associated development that would be built on land west of Junction 12 of the M6 in southern Staffordshire. The West Midlands Interchange would be linked directly to the West Coast Mainline, one of the country’s principal freight routes, and will be well placed to serve Birmingham, the northern M6 corridor, Staffordshire and parts of Warwickshire.

Four Ashes Limited, the developer behind the West Midlands Interchange scheme, will be talking to nearby communities, residents, businesses and regional organisations to work up plans over the next 18 months. The firm intends to develop a masterplan which will be the subject of a full public consultation this summer. This will help develop more detailed proposals for a second round of consultation next year.

The West Midlands has a long established need for regional logistics sites, dating back to the West Midlands Regional Logistics Studies of 2005 and 2009. South Staffordshire and the north Black Country was identified as a priority location, in most urgent need of a large scale rail served warehousing development. That need remains outstanding.

The Managing Director of Four Ashes Limited, Peter Frost, said: “A strategic rail freight interchange is something that has been long identified as essential for the future prosperity of the West Midlands region. The region’s strong logistics and manufacturing industries will need faster, more reliable transport links in future to attract global business and investment.

“The Government too, strongly encourages what is known as modal shift meaning the transport of goods from road to rail, to help reduce transport’s carbon emissions and to provide economic benefits. It sees strategic rail projects like the proposed West Midlands Interchange as an important way to reduce the costs of moving freight and reduce HGV trips on the national and regional road network”.

Commenting on the project, Guy Bates, Head of Freight Development, Network Rail said: “Network Rail is supportive of the West Midlands Interchange proposal and will be engaged with the Four Ashes team as it progresses through the normal process of rail technical investigation, planning and design.”

Peter Frost continued: “This site has been identified because of its exceptional location with direct connections to the M6 and the West Coast Main Line. These factors, together with its size which is in the region of 250 hectares, make the site ideal for a strategic rail freight interchange.

“We are at the early stages of designing the scheme and are assessing layout options. Talking to the local community about the project to help us shape the proposals is very important to us and will therefore form a significant part of the design process.”

Due to the project’s scale, it qualifies as a nationally significant infrastructure project and will require a Development Consent Order, which needs approval from the Secretary of State for Transport.

The site has been promoted through the West Midlands RSS and through the South Staffordshire Local Plan, but the project qualifies as a Nationally Significant Infrastructure Project and so will require a submission to be made via the Planning Inspectorate.

The project has received approval to GRIP 3 from Network Rail.